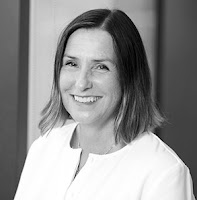 Tania Hemming thinks the word ‘innovation’ is overused. Morton Fraser’s Marketing & BD Director believes expectations and clarity around when the word innovation should be used needs to be challenged more often. The word 'innovate' is to make change, do something in a new way, to introduce as or if new - not all innovation needs to be monumental or life changing. And are we talking innovation or differentiation?

We’ve all been there, when you are asked to promote something as "ground-breaking" yet it is essentially a "seen before” initiative. Whilst these developments by a firm may be important to promote in some form or other, dressing them up as innovations runs a very real risk of undermining credibility in what the firm says and how it is perceived by its clients.

Tania believes the answer is in being far more precise about what we mean by the term innovation, rather than using it glibly as a buzzword: are we talking radical change? True market disruption? Or just incremental progression of a market idea? The lines may be blurred and that's ok, but let's be clear and communicate that by using the right language and label.

I met Tania at The Lawyer’s Marketing Leadership Summit last November, when she took part in a roundtable discussion we hosted entitled “When every law firm is an innovator, how do you differentiate your innovations?” Her contribution was insightful, particularly around the use and misuse of the term innovation, but sharing the floor with a dozen other top law firm marketers meant it could only be short. So I invited her to a one-to-one over Zoom to hear more.

“Our understanding and expectation of what a new idea or initiative can do needs to be crystal clear”, she told me. “When we first think of innovation we probably think of radical change but it doesn’t need to be seismic change to be of value. Incremental changes can be just as important in moving everybody and the market itself forward. But you need to present developments as they truly are, because exaggeration undermines credibility. We need to challenge our perception of what we are seeing as being innovative, we need to be clear about the level of change you are talking about and can we truly say they are disrupting the market? Is the change architectural, or is it radical? Is this something entirely new? Or a development of an existing idea or taking a concept from one market into another?"

Tania also pointed me towards a survey conducted by Altman Weil last year (Spring 2020) called “Law in Transition”, which revealed shockingly that 70% of law firm partners see themselves as the main obstacle to change … and 60% of those are unaware of what they need to do differently.

Tania is keen to ensure that innovation is not seen as a one-off initiative but should be a strategy within the firm and an evolutionary process. She also said, "The question is how to embed that into a professional culture that is often seen as conservative. With law as a cornerstone of society how brave do you want to be, what risks are you prepared to take, and are you prepared to fail". She continued, "These factors aren't something that comes naturally for law firms. I am fortunate that my career in professional services has been with law firms that look to push the boundaries and 'put their head above the parapet', what is radical change for one person is often incremental for others. If we are going to speak "innovation" to our clients, we have to understand what their perspective is and what the value is to them."

The importance of “Client-centricity” is a topic that comes up regularly in this blog as I interview leading legal marketeers on a wide range of topics. Lawyers need to communicate in their clients’ language and they need to understand the value they are adding in the context of clients’ own business worlds, and as they see it. Law firms need to distinguish between radical and incremental change from their clients’ perspective. Let’s take a good hard look at the word innovation in our press releases and marketing speak and challenge ourselves to be realistic about what the initiative can really do. Let’s focus on describing it accurately, promoting the benefits and value-add that will give clients true advantage, but let’s not bury their true value under meaningless buzzwords.

Our good friend Catherine Baksi, award-winning legal journalist and all-round dudette (remember her rocking up on Sky News sporting a leather bomber jacket and in her cut-glass British accent quoting a Clash lyric to explain the Supreme Court's prorogation judgment?) told us this week about a campaign her father @ArunBaksi is leading.  He is working tirelessly, she says, to point out the inherent unfairness in how social care is means-tested, but health care isn’t. It's a no brainer when someone brings it to your attention so right away we signed his petition to bring about change.  You can read about the campaign here and sign the petition. Please do also share on social media and help us put the word out far and wide.*** 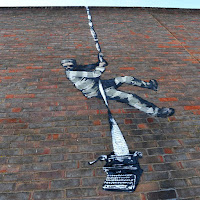 My home town of Reading was all a-buzz this week after the sudden appearance of a very cool piece of graffiti on the side of the old Reading prison wall.  "Is it a Banksy?", tongues wagged on Facebook and in real life?  It looks like one". It certainly does, the image depicting a convict escaping down the outer prison wall on a rope made of bedsheets weighted down by a typewriter.  Is it supposed to be Oscar Wilde, famously interned in Reading Gaol for gross indecency in the 1870s?  (Reading is very proud of this history.)  The face looks more like Robert del Nadja to me, founding member of the band Massive Attack and Bristol graffiti artist, often rumoured to be Bansky himself. But maybe it's just the rock star sunglasses...

Sure enough a few days later Banksy claimed the artwork was his.  Just love this video s/heposted on Instagram showing how s/he did it, with wonderful art direction from the US's famed Bob Ross, presenter of The Joy of Painting.  Enjoy!