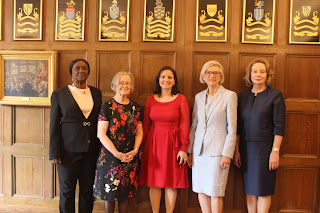 The world is catching up with Dana Denis-Smith. In conversation with her at last week’s FT Innovative Lawyers Summit, I commented on how fantastically her First 100 Years of Women In Law project has caught the imagination of so many people in my world, and men and women alike. For any of you unfamiliar with its aims, the initiative is designed to showcase the contribution of women to the law and highlight female role models for young lawyers, by telling stories of the barriers and opportunities female lawyers have encountered since they were first allowed to become practising lawyers almost 100 years ago.

“I’m quite astonished that it’s become so zeitgeisty. I’m far more used to being the squeaky wheel in the corner, the lone voice banging on about things I think are important but nobody else seems interested in” she tells me shyly. “I thought it would be the same with this initiative. But when I first conceived the First 100 Years of Women In Law project I had no idea what was around the corner: Trump, Harvey Weinstein, the whole #MeToo movement. Suddenly equality and dignity for women have become mainstream issues rather than specialist interest topics.”

Dana invited me to her next event so we could talk more about her work and I couldn’t believe my luck! Suddenly I had the hottest ticket in town: First Women of the Supreme Courts in Conversation, hosted by Gray's Inn and sponsored by Serjeants Inn Chambers (one of its joint CEOs is the effervescent  Catherine Calder who is a trustee of Dana’s project) Mischon de Reya, Clyde & Co and LexisNexis. So I was treated to a panel discussion on what it is to be a woman in law between Baroness Hale, the famed law reformed and the first woman to serve as President of the UK’s Supreme Court; Susan Kiel, another law reformer and the first female Chief Justice of Australia; Beverly McLachlin Who was the first female Chief Justice of Canada and the longest serving of any Sec; and Georgina Wood, the first woman to service as Chief Justice of Ghana. Given a key aim of the First 100 Years project is to role model success for younger women, way to go!

These awesome women gave us gems, such as “Women are half the population so bringing your “womanhood” to your work is just as valid as men bringing “manhood” to theirs!”

More than one said “My life changed as a young woman after reading Simone de Beauvoir’s The Second Sex”, describing the dawn of their realisation that women are somehow secondary persons to men. [Note to self: order copy for daughter right away.] Whilst the first wave of feminism was focussed on legal rights for women, the next wave, these world-leading custodians of the law told us last night, must be to deal with the more insidious cultural issues that prevail to this day, which subtly, not directly, telling women over and over they are subsidiary to men.

Indeed the premise of the First 100 Years initiative is based on marking next year’s  centenary anniversary of the Sex Disqualification (Removal) Act 1919,  which ended the notion that women weren’t ‘persons’ in the eyes of the law, which had prevented them from being able to practise law.  But law reform only gets us so far. It’s a cultural shift we need to achieve next, for everybody’s benefit, men’s and women’s alike.

Last night Dana invited us to join her on a journey. “The First Women of the Supreme Courts event is just the first of a whole series of exciting and inspiring initiatives and events taking us up to the centenary moment next year, 23 December 2019.  There will be storytelling, events and an amazing digital museum documenting the journey of women lawyers from 1919 to the current day. We will be promoting interviews and biographies of prominent women in law on our website and also asking about the pioneering women who inspired them."

Today, everyone wants a slice of Dana and her First 100 Years project.  This is definitely an initiative of our time. As I say, everyone is finally catching up with her thinking.
***

The other hot ticket that landed in my lap unexpectedly was for the FT Innovative Lawyers Summit.  A client over from New York asked at the last minute if I could meet him there and help with some introductions.  What a privilege!  I can't divulge any detail of what was discussed in the sessions, (Chatham House Rules, you understand), but I can tell you that my brain definitely expanded several inches hearing discussions about the role of humans v machines in the delivery of legal services today and into the future.

And I learned from a new friend at UnitedLex, Nancy Jessen, that the smart firms are thinking about this and using classic management consultancy concepts such as the "stratification of legal services".  This is not a new concept they told me, but I have to say I'd never come across the terms before and I've been in conversation with law firm managers for some 30 years.  I definitely think that that some management consultancy discipline could be very good news for law firms just now as they navigate through how technology an digitisation is transforming the business world.  UnitedLex we need you!
***

We loved The Telegraph's story about the use of foreign words in advertising.  Audi, for example, has relied on ‘Vorsprung durch Technik’ (advantage through technology) for over 30 years to bring to mind Germany’s reputation for high quality craftsmanship and technical expertise.


The reason foreign words and phrases work is down to psychology apparently: they encourage people to embrace a fresh outlook.  This is a subject close to  our own hearts of course, our company name Kysen being a phonetic interpretation of the Japanese business term "Kaizen" which means "continual improvement".  A concept we buy in to as we are all keen here to keep learning....

Posted by Clare Rodway at 16:36 No comments: