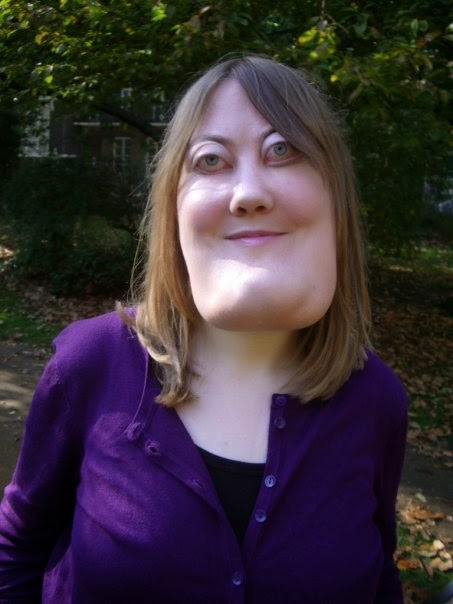 As soon as I saw this year's Red Nose campaign theme, "Make Your Face Funny for Money" I felt for our friends at Changing Faces. They work so hard at changing public attitudes to facial disfigurement it must be so disheartening for them to see a fellow charity drop such an awful clanger (see the photo of the "pegged face" in particular). As regular readers of this blog will remember, Changing Faces are the people who created that brilliant film short "Leo" outing the disgraceful negative attitude most of us harbour towards disfigurement by pointing out how often facial scarring is used in film to signify a baddie. Click here to refresh your memory and see here for more information on their Face Equality on Film campaign.

As luck would have it, I had a coffee meeting with Changing Faces champion Victoria Wright already scheduled so I took the opportunity to ask for a reaction "It's something I faced in my daughter's playground when I started to take her to nursery two years ago. In their innocence, some of the children would come up to me, ask me about my face and ask if I'm a monster. They were confused about why I look the way I do. I thank the years of support and love I have had from my family and my husband, and the excellent coaching I've had from the Changing Faces team in how to deal with the outside world [the charity offers a wide range of support and mentoring for people and families dealing with disfigurement and the public's attitude toward it] that I'm able to skip lightly over my own feelings when these comments come and concentrate more on to the right way to respond for my daughter's sake (not to say that such comments don't hurt me: they do but I'm very experienced now in dealing with that!)"
So how did she respond? "I just looked them in the face kindly and said, "No I'm not a monster, sweetheart, I'm Emmy's mummy! I was born with a poorly face. It doesn't hurt, it just means I look a bit different" which they accepted immediately and then just ran off and continued with whatever they were doing before.  They soon accepted me and after a few months, would run up to me to tell me about their toys or to tell me that Emmy had been a cheeky girl that day!."

So what does she make of the Make Your Face Funny For Money campaign, I ask. "Well, my face has been funny for years and nobody gives me any money for it!  As you can tell, I do have a sense of humour about it, like anyone else. Pulling funny faces can be, well.... funny.  But I think it's images that mimics a particular facial disfigurement that it crosses the line, or gets close to it.  Facial palsy for example.  And I do think that companies should take note if someone with a disfigurement says that a particular image or product insults them, even if the offence was unintentional.  Too often they simply try to explain it away and dismiss what we are saying."

Victoria has a special place in my life because long before I was formally introduced to Changing Faces, in the 1990s, it was her comments on a TV debate spliced into a documentary I was watching about a plastic surgeon who took on risky cases that other doctors refused that stopped me in my tracks and made me question my own attitude to facial disfigurement when it had never occurred to me before there was any kind of issue to think about. I had a couple of friends who'd been going through reconstructive surgery for years for their lips, which is why I'd tuned in to the programme about the surgeon in the first place. Then suddenly he was on a panel with Victoria, who in one sentence changed forever the way I think about so-called disfigurement. She said: "Perhaps it's not your clients' faces that need to change: perhaps it's our public's perception of unique faces [check]"

Since its launch in 1992 Changing Faces has grown into a business employing over 30 people, now with plans to expand into other countries. And it has now multiple awards, eg Most Admired CEO at Britain's Most Admired Charities, People's Choice at Body Confidence Awards and an OBE for its CEO James Partridge among many other accolades. But almost 25 years later, looking at this month's ridiculous Red Nose boo-boo it's clear Changing Faces still has a lot of work to do.

To find out more about their work, click here. To make a donation, click here with your bank card at the ready!

So we all had a good chortle about the judges struck off for viewing porn on judicial computers. The general consensus of the legal tittle tattle of the last few days seems to be that it's not so much a moral issue, but certainly a demonstration of a disastrous lack of judgment. Of all the jokes and cartoons circulating about this, the prize for the best summary of the issue goes to Times' diarist Patrick Kidd. He tells us Times cartoonists were keen to send up their lordships with references to "Rumpy Pumpy of the Bailey" or "50 Shades of Grayling" apparently. Most of all though, I loved his observation that "when Igor Judge was Lord Chief Justice, judges focussed on judging... Now John Thomas is in charge, judges prefer to focus on their John Thomas." Enough said.

Our roof terrace came into its own this week... no, not because of any intensely warm Spring sunshine (ever the optimist, I'm sure that is just around the corner), but to get a good vantage point for this week's treat: the best solar eclipse since 1999. Ok so we didn't get the most stunning celestial display (Sun political correspondent Craig Woodhouse's Westminster tweet sums up the experience in London rather well here.) And the rather muted event sparked a plethora of "grumpy tweets", which the Guardian rounded up rather nicely for us. But it was a nice diversion on a Friday morning nonetheless. Did you get a better view? Do share here if you did.
Posted by Clare Rodway at 19:48 No comments:

In the next few weeks, various members of the Kysen team will be taking over Clare’s blog. This week, Account Executive Tim Wells talks to James House QC of 7BR Chambers on his recent Silks appointment.
***
Speaking to me still in recovery from the raucous celebrations that accompanied his appointment to QC, James House is candid about his enjoyment of the grand traditions surrounding the silks process, as well the modernisation that the legal sector has adopted over the last few years. The two aren’t incompatible, he argues, and barristers are in fact better equipped to practise as a result of the apparent discrepancy.


At 7BR Chambers, James practises all aspects of criminal law and quasi criminal matters, and also undertakes professional and disciplinary actions. In January, he was one of 93 new silks, celebrating silks day on 16 February along with the rest of his cohort in gowns and wigs. Is this pomp and circumstance at odds with the modern app-wielding barrister?


“The tradition is a fantastic thing, and obviously great fun too! You have to put in a lot of hours just to get considered and the ceremony is a reflection of that. You are signifying all that has gone before you, the best part of 800 years of the legal profession, emphasising that sense of history. It will be a sad day when the gown and wig are hung up for good,” he says.


Yet James is far from an archetypal antiquated barrister. Living in South Leicestershire, it would be understandable if he felt remote from the set’s London base at 7 Bedford Row. Technological change has, however, made the distance perfectly manageable, and is now even penetrating the courtroom.


“I frequently open a case in court using a laptop instead of notes, and the technology comes into its own in closing a case. You can amend your speech in real time, reacting to your opponent’s closing speech. Technological developments are just a response, like in the business world or in wider society, to the ease of accessing information. Comparing my experience of other sets, 7BR is very progressive. From video conferencing to Skype to the technology enabling the seminars we deliver, 7BR is really ahead of the game.”


James’ Skype sessions are certainly timely; earlier this month the Online Dispute Resolution Advisory Group of the Civil Justice Council recommended setting up a pilot programme to settle non-criminal cases of less than 25,000 pounds online, thereby cutting court expenses. The final stage could be a direct video conference with a Judge using Skype or an equivalent platform.


“It’s an excellent idea,” James tells me. “I have used video link in the past – to countries as far flung as Canada, Cyprus and Germany – and it really does cut down the cost and inconvenience of flying. The only reservation I have is the requirement to use a specialist provider. If we were to put in sufficient safeguards, I don’t see any reason why we couldn’t remove the monopoly of organisations and do it through the courts for free.”


Coverage of the silk appointments this year inevitably carried dire warnings about a legal sector still failing to inspire female or ethnic minority candidates. The number of female awardees increased by 39 percent from 18 to 25, though the actual number of female applicants “remains stubbornly low” according to Queen’s Counsel Appointments. Does this chime with what James is seeing day to day?


“It takes 10-15 years at a certain level to reach silk, and the push for ethnic minorities and women is only really just beginning. It will definitely take time for the figures to catch up and bear out the reforms taking place at the moment.”


For a process and profession supposedly stuck in the past and refusing to change its ways, you still can’t help but be encouraged by James’s enthusiasm for a more efficient and inclusive future that is quietly making its way to the Bar.

Posted by Clare Rodway at 17:56 No comments: