When The Times announced that Jonathan Ames would be editing its new daily news shout "for all that's legal", alongside Frances Gibb, I knew The Brief was going to be a success. I can't think of anyone with a better blend of establishment (Sorry J, I know you'd prefer me not to say this, but it's true!) and maverick credentials. Jonathan has been a legal hack for almost as long as I can remember.  He was long time editor of The Law Society's Gazette; he has edited more than one overseas/international legal magazine, including a stint based in Dubai; he has been contributing to  The Times Law section on a Thursday for years; and he is equally famous for his recent role at the highly irrelevant Legal Cheek and his iconoclastic tweeting under the pseudonym @judgejohnhack. I knew his handling of The Brief, launched this September, would be informative, insightful and entertaining in equal measure. And in the two months since its first despatch, the evidence backs me up.

"The Brief  is modelled on The Times' Red Box for political coverage which has been phenomenally successful," says Jonathan. "The powers-that-be wanted to replicate this success with the papers' legal readership."  The Brief delivers "the most important and influential news in the legal industry" to subscribers' inboxes by 8:15am Monday to Friday. So far in terms of topics, Jonathan has covered the need for more specialist judges in the new financial court; Supreme Court judges' pleas for better gender diversity in senior judicial ranks; the accepted culture amongst the Bar of making sexist jokes in court; Big Four accountants competing on law firms' patch, edging in to Top 50 Law Firm league tables; the legal profession's criticism of the UK's refugee policy; and confirmation from Lord Chancellor and Justice Minister Michael Gove that the (ceremonial) tights are his own!


I'm a particular fan of their daily Opinion column. It's one of the things that makes certain I open my Brief email before the working day kicks off. It's not like any other legal Opinion column I can think of.  It has so much more bite.  "We have very strict rules for the opinion column on The Brief", Jonathan tells me.  "We're very very particular about who we commission to express an opinion.  We only want true thought leaders of the profession, whether their authority comes from a particular role or job title", [so far Jonathan has interviewed shadow Lord Chancellor and Secretary of State for Justice Lord Falconer; Supreme Court President, Lord Neuberger; and Lord Chancellor and Justice Minister Michael Gove] "or they are influential for some other reason" [for example the inimitable Ronnie Fox].  "And more importantly, they need to be prepared to come right off the fence.  Both Frances and I feel strongly about this.  There are plenty of other opinion slots elsewhere in the legal media for people who want to give a "balanced, measured view", exploring all the different sides of a legal issue.  We want opinion with a bit of passion behind it, people who really want to make a point.  It makes for much more interesting reading."


Well I can attest that Jonathan is as good as his word on this: whenever I pitch an Opinion idea for The Brief, he'll always test me with "Are they  prepared to come right out and say what a disaster/travesty/injustice it is....?"


No wonder we all make time to read The Brief each morning.  Wouldn't feel right to start the working day without it!


If you have not yet had time to get round to subscribing to The Brief, you can sign up here.
***

What on earth was Millionairess Kate Winslet thinking, stepping in to the Equal Pay debate and suggesting it's "vulgar" to discuss money, particularly salaries, in public?  Has she really lost touch with the fact that most women's working lives are rather different from hers, and that they live in a world where fair pay actually matters?   When you're discussing differences of a few million pounds in your earning compared to your male counterparts, perhaps the issue does feel more embarrassing than pressing.  But for the vast majority of working women, inequality has a rather more earthly consequence.
Ms Winslet's comments came in the week this November that women stop earning until 2016, if you compare their salaries to men's.

Now what I want to know is whether this androgynous photo shoot (see pic) for the current issue of L'Uomo Vogue is supposed to make up for her feminist faux pas.  What lesson are we supposed to take from this?  Are some [extremely wealthy] women better seen and not heard [on the subject of equal pay]?  I don't think so.  Far better that women in the public eye, who enjoy their role model celebrity status, think before they speak.  And talk sense.  Please Kate....

Did you catch the fabulous story of the judge who quoted Taylor Swift lyrics in a judgment dismissing a plagiarism case against the songstress? US District Judge Gail Standish wrote "At present, the Court is not saying [opponent] Braham will never, ever, ever get his case back in court.....But, for now, we have got problems and the Court is not sure Braham can solve them.  As currently drafted, the Complaint has a blank space—one that requires Braham to do more than write his name. And, upon consideration of the Court's explanation . . .Braham may discover that mere pleading Band-Aids will not fix the bullet holes in his case. At least for the moment, Defendants have shaken off this lawsuit.”

A bottle of wine for the first person who can name all the Taylor Swift songs referenced.  Answers in the comment section of this blog please.

We have our own creatives amongst the judiciary on this side of the pond of course.  Who remembers (who could forget!) Mr Justice Peter Smith's inspired judgment in the failed plagiarism case against Da Vinci Code author Dan Brown?  He inserted a code within the judgment, Dan Tench of Olswang was the first to spot it and crack it, and the story went viral all around the world in hours.

Posted by Clare Rodway at 12:36 No comments: 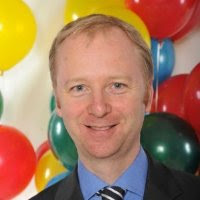 BBC Children in Need CEO David Ramsden is hoping you are all going to dress up as your favourite childhood hero for his 2015 campaign later this month. The big BBC Children in Need Appeal show is airing on BBC1 on Friday the 13th of November. But the charity is accepting donations now.

David tells me: "BBC Children in Need’s vision is that every child in the UK has a safe, happy and secure childhood and the chance to reach their potential, So we thought that portraying childhood heroes was a good way of underlining ideals and dreams that should be a big part of a normal growing up."

Children in Need supports some 2,500 projects around the UK that help young people facing a range of disadvantages such as poverty and deprivation; disability; or who have been victims of abuse or neglect.

“Whatever you do", David says, "whether it’s a day spent dressed as your childhood hero, a bake sale at work or a ramble with your friends, it will help BBC Children in Need give children and young people in the UK the childhood they deserve.”

After our conversation, I start thinking in contrast about that troublesome theme Red Nose Day picked earlier this year: Make your Face Funny For Money. I’ll leave you to join the dots back to my interest in Changing Faces's work, to guess why I thought this campaign so ill-judged. All I'll say is how much more I appreciate the positivity and creativity of the Children In Need campaign in comparison.  Can I encourage all of us to take part in the fun on 13th November?

Who would you select as your childhood hero?  You can join in the Twitter chat here.
***

There were no fireworks at Kysen this week, as we had to say goodbye to Honey

After almost nine years of dedicated, loyal service, Honey had not only became a central figure in the Kysen team, but part of the Kysen brand itself! And being the person she's sat next to for almost a decade, I can't actually imagine what life at work is going to feel like without her. I just know I'm going to miss her.

This week we welcomed Kysen newcomer Nicole Bailey, who steps in to Honey's old role and whom we're all enjoying getting to know.  She's made an excellent start.

So business-wise I know this transition is going to be perfectly smooth. But personally... well that's another matter. In this sense, as a co-worker, supporter and friend, Honey can never be replaced.

Bonne chance Honey!  Come back to visit us!
***

We chose a Bond outing for our Kysen bonding session and farewell party for Honey. Almost enough to cheer us up.  Those of you who know me well will be well aware I am a film fanatic and Bond enthusiast.  And I always love to see what Bond on the silver screen reflects back to us about our society, as plot lines and themes in this franchise are always  a good measure of the Zeitgeist. Just consider that in Spectre the main story revolved around Big Data; that this was the first in the franchise to cast a beautiful 50-year-old Bond "girl" (let's hear it for Monica Belluci); and that there was a clear anti-violence thread to the plot line too, and you'll see what I mean.  And if gender equality and political correctness mean the title sequence now has to show as much of Daniel Craig's naked flesh as that of his female colleagues, well we'll just have to put up with that.
Posted by Clare Rodway at 17:11 No comments: