When a female lawyer who is officially recognised as the “Best Regulatory Lawyer” of the year tells you that the odds of being a partner in a law firm are still in favour of men, you know you need to sit up and take notice.

I had the pleasure of sitting next to Catherine Wolfenden at the Legal Business Awards, being a guest of her firm Osborne Clarke on the night they won top prize as Law Firm of the Year.  The conversation and company around the table was already sparkling – we were dining with one of the profession’s most famous managing/senior partner combos, Ray Berg and Simon Beswick, also with comms supremo Simon Marshall, among others – but once their award win was announced the mood became positively effervescent.

I’d already heard of Catherine’s own win at the 2015 Women in Compliance Awards, so was itching to talk to her about her experience as a successful woman in a man’s world. I was surprised at what she had to tell me.


“When I was first starting out in my career, I didn’t really think gender was an issue. It’s something I’ve become more aware of as I’ve risen up the ranks and become more senior.”  Somehow I had thought it would be the other way around, gender discrimination becoming less of an issue the more expert and highly-regarded in the profession she became.  I was all ears as she told me her story.

“Throughout school and university I’d always been encouraged to succeed, to be ambitious. At Oxford (I studied Biological Sciences) there was a pretty decent split between male and female students across all subjects as far as I could see, in the sciences as well as the humanities and the arts. I am one of three daughters and was brought up without any question of my gender having an impact on life choices. Then as a trainee at Freshfields, again there was a pretty 50/50 male/female split in our intake year and I can honestly say I never experienced any discrimination in the way we were trained, or in how the work was allocated.  It was such a non-issue in fact, that I barely thought about it at that stage.

I first started to realise that gender is an issue on progression in the law around the time of qualification, when deciding which area of law to specialise in. I thought properly for the first time who my  female role models in the law were, someone to inspire me, who demonstrated what success looked like for a woman working in a commercial law firm, both professionally and personally.  I seriously struggled to find a single woman who I was inspired to emulate.  No-one seemed to have sussed balancing life outside of work with an interesting career in a top firm, whether or not children were in the picture.  And then I started to see the career casualties, as one by one women dropped out of the drive to move up the ladder in the partnership.

“There were men who balanced a full-on, exciting work portfolio with outside interests such as competitive tennis tournaments or triathlons.  But actually not that many.  And of those I found, I realised that their personal blend of work/life balance was often because their partner had stepped off the career ladder and was providing all the home support, or because they were able to employ a support network of people to help them.  How many men are prepared to do that for their partners careers and who can afford two nannies and a housekeeper?!

“So it wasn’t long before I decided to leave Freshfields and work for a smaller firm, to see if things might be different there (– with the associated drop in salary!).  And it was.  There was far less emphasis on time spent in the office.  Success was not about “presenteeism”, but about the service you give your clients.  And part of this is directly to do with the sort of person you are as a whole; being a good lawyer is a long way from needing to be chained to a desk, advising on law in the abstract; a good lawyer needs to be rounded,  understand the outside world that are clients’ businesses are operating in and, most important of all, be real enough people that clients actually want to engage with us and have working relationships with us.  In the final analysis, making sure a firm has lawyers of both sexes who are happier, healthier and more human to work with, actually makes good business sense.

“There are some great female role models in senior positions in law firms, but not as many as you would hope.  One of my first role models was Alayne Swanson who was the Head of Litigation at Maclay Murray & Spens (I don’t think she knows this!).  I was inspired by her success: she had great clients, for whom she did great work, was a fabulous leader, she spent time with her (three) kids and she had a great sense of humour. She was someone I could aspire to be like as a lawyer and as a person.”


Does Catherine think it is possible for lawyers to achieve a work/life balance?  “Well I’m striving to have that”, she tells me, “and to show others it can be done.  But of course what "work/life balance" and "success" look like, is different for everyone.  I do believe that having female role models coming through in the profession is hugely important to keep women motivated to work hard to move up the career ladder.  It is really demanding and I think it is key to be able look up and see that all that hard work can pay off in a rewarding long-term career with progression and a life outside the office.  It is important that senior women are conscious that we are looked up to as role-models by more junior female lawyers and that we try hard to show the right attitudes and behaviours."
***

I knew I was assured of meeting interesting people at LegalCheek's Summer Party and I wasn't disappointed. The select gathering at The Proud Archivist (so über-trendy a venue it's "beyond" Shoreditch, on the canal between Dalston and De Beauvoir Town) provided a welcome opportunity to catch up with some of the profession's best tweeters and bloggers.  Among others: @judgejohnhack @leonglenister author of the Law Think blog, @legalhackette and @wigapedia.  And of course if was good to catch up with the great man himself, the brains behind Legal Cheek @alexaldridge, who proudly talked about the latest rebrand and this cheeky blog's coming of age. This made us worry: is he now part of the legal establishment?  But if this week's headlines are anything to go by, our concerns were unfounded.

One particularly interesting person I met was lawyer, Apprentice star and entrepreneur Lauren Riley, who has launched an App designed to "revolutionise how law firms communicate with their clients". The Link App promises to keep clients in the loop without back and forth communication, improving customer service at the same time as saving time and money for the firm and increasing productivity".  An essential tool in an increasingly crowded and threatened marketplace, she says.  When I met Lauren, she was right in the midst of promoting investment opportunities in the App via crowd funding. She's particularly interested to hear from lawyers or firms keen to use the App and take a stake in the business.  If you're interested, take a closer look via this link. 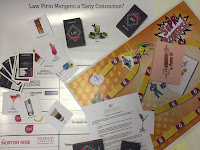 We had fun and games at the Hospital Club last week at our most recent Tonic Club meet-up. The evening took the form of a Legal Games Night co-hosted with long-standing client, brand valuation specialists Intangible Business. The idea was to tap in to London's latest craze for retro games, to inspire discussions on creativity and how to bring more imagination into our work.  And held at the Hospital Club's Loft Lounge for that added "Jumanji" vibe.

But by far and away the favourite of the night was Intangible Business's guessing game, inviting guests to recognise recent law firm mergers in cocktail form. It was all in the taste, of course!  You can try this one at home too, if you have the ingredients for a Singapore Sling (King & Wood Mallesons - a classic with an Asian flavour); a Manhattan, (Squire Patton Boggs - a strong US flavour); and a Long Island Iced Tea (Slater & Gordon's string of recent acquisitions - a strong tipple with lots of ingredients that you can continue adding to) ...  as long as you promise to drink responsibly!