RSA Chief Exec Matthew Taylor is challenging you to Change The Way You Think in 2015.  He is passionate about our need for a New Year Resolution to improve social integration and his fervour for how we might live differently flies off him in sparks.

The Royal Society for the encouragement of Arts, Manufactures and Commerce is dedicated to ideas and actions for a 21st Century enlightenment.  Prior to his appointment as its CEO almost ten years ago, Matthew was Chief Adviser on Political Strategy to then Prime Minister Tony Blair, so he knows a thing or two about social planning at the highest level.  When he started to talk to me about how he sees the future and how we can best employ technology to re-think and reconfigure modern living, particularly in the context of the various “Smart Cities” initiatives in play, (a subject close to Kysen’s heart just now), I was all ears.

“Smart City Thinking is all about using digital technologies to enhance performance and well-being, to reduce costs and the consumption of resources and promote more effective communication with citizens. The technology is there already to deliver a very different way of living,” he tells me over coffee in his John Adam Street office, near Embankment, “and there are some very interesting ideas in circulation, and still in the pipeline, about how we might best approach this. But to date, our investigation of what  eg smart energy, smart building, smart mobility, smart infrastructure, smart technology, etc can do for us seems to me to be rather limited.  We could be reaching for so much more!  Let me explain what I mean: a simple example that is often used to typify smart city thinking is the development of electronic bus displays, giving passengers real-time information about the arrival of their next bus, enabled by satellite technology and accessed by passengers at bus stops or via phones or internet.  A modest change, but one that has completely changed people’s experience of waiting for buses; ie you no longer have to!  You can now to turn up at a bus stop just as your bus arrives.  A big improvement to your personal experience of travelling by public transport, and a way of smoothing the flow of travel around a city, to everyone’s benefit.”  It’s interesting to think, isn’t it, how our past experience of waiting for buses has become so embedded in our common consciousness, the expression “It’s like buses” being part of British vernacular, (meaning waiting for something for ages then three or more coming at once). If we no longer have to wait for buses at all, it can only be a generation or so, surely, before this idiom loses any meaning and falls out of use.

“Another much-quoted example of the thinking is how car use has changed in cities; vehicle ownership is no longer always seen as a rite of passage, or a status symbol, as young people living more independently than their parents’ generation perceive it as too expensive, not to mention their concerns about environmental damage. So as new digital and social technologies have enabled car-sharing services such as Zipcar and LiftShare, the market has been there, in turn bringing positive impacts on urban traffic circulation as a result.  Again, a good illustration of how the smart use of new  technologies can bring big changes to people’s lives, individually and collectively.

“But…. we could be so more ambitious than this!” Matthew asserts.   “What I’d like to see is our cities becoming socially smarter.”  From a man who used to advised a Labour Prime Minister, perhaps this emphasis is not so surprising.  But what does being socially smart entail in practice?  “I believe that a more intelligent city is one with true social integration, not just between different ethnicities, cultures and classes, but different ages too.  Here’s one example: currently most care homes for the elderly tend to be situated on the edges of our towns and cities.  Why is this?  It places these vulnerable people, already on the fringes of our youth-obsessed society, also physically on the outskirts of our communities.  If we were to rethink this and position them more centrally, our elders could be far better integrated into every day society, so not only would they be more inclined to thrive, but everyone else in the community would be the richer for it too.  If we are reconfiguring urban life for the modern age, it’s essential we don’t miss these sorts of opportunities to bring more of us together in new ways, bridge more social gaps and continue reaching for the holy grail of a fully inclusive, integrated society.”


Well, the RSA does promise to make us think differently.  And Matthew is clearly leading by example.  If you’d like to stay tuned in to the RSA’s provocative brand of thought-leadership as the year unfolds, you might like to consider becoming a fellow, which you can do here.  Or simply follow them on Twitter @theRSAorg.
***

Designers at realityhouse have been playing their cards very close to their chests.  I thought MD Mike Fieldhouse was up to something when we caught up before Christmas, but his poker face was giving nothing away. Now I see he has just released a delightfully fun card game designed specifically for the legal profession: Law Trumps.  The game consists of a pack of 52 cards, each depicting a leading law firm and five statistics about it, in categories such as turnover, number of partners, number of UK offices, etc.  (The data is drawn from various sources such as The Lawyer's UK 200, The Legal 500, and law firms’ own websites).  The game works in the same way as traditional Top Trumps, so a player calls a category and compares values with their opponents’ cards.  The player with the highest values wins the round and takes their opponents’ losing cards.

What a neat trick: a great way to raise awareness of the realityhouse brand, as well as making clear their specialist interest in the legal market … and all at the same time as expressing deck-loads of personality.  Mike and his team have definitely played their cards right this time.

If you know of other law-themed games, do please tell us about them.  We’re planning to compile a compendium.  Watch this space….
*** 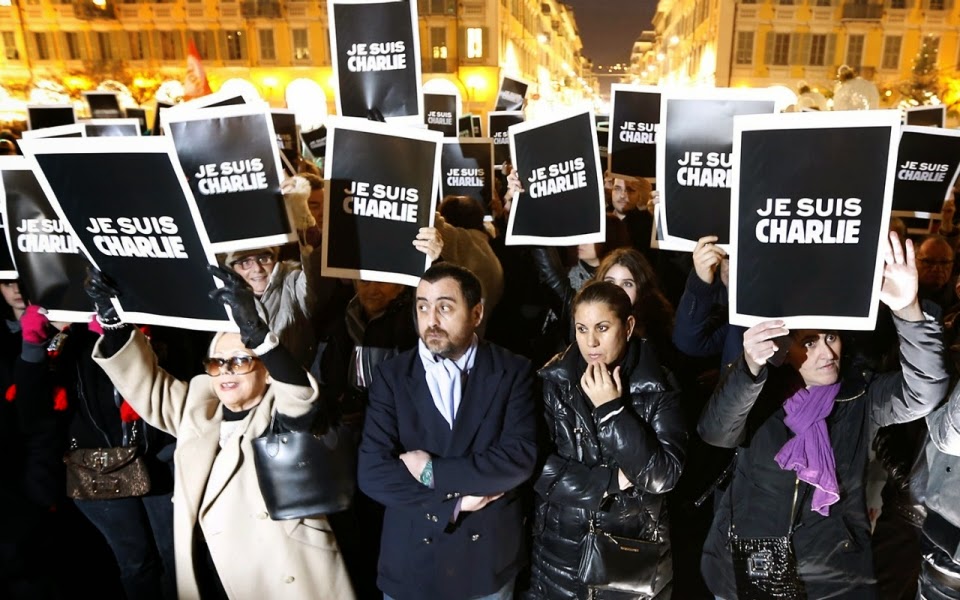 Words fail me when it comes to the Charlie Hebdo attacks, this news is so horrendous.  Ian Hislop put it well in his public statement, when he responded to the terrorist killing of four of France's most respected satirical cartoonists, and eight others, with the words:  “They paid a very high price for exercising their comic liberty.  Very little seems funny today.”  You can read his full statement here. As others have said, it's just astonishing that cartoons can be considered weapons of war.

The only positive glimmer in this situation is how the sane world has reacted to it. Standing in Trafalgar Square on that first evening, scrolling the news of similar gatherings taking place across the entire world, I felt quite proud of humankind thinking how fast the mass response had been and how immediately people had poured onto the streets in protest.  And the cartoons! The wonderful satirical images drawn in response to the shootings being the perfect demonstration in action that the pen will not be stilled.  Do take a look here. But in the midst of this maelstrom, are we still as confident asserting that the pen is mightier than the sword? For everyone's sake I hope we will come out of this terrible time being able to answer this question with a resounding "Yes".