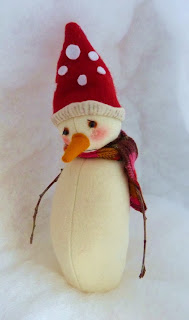 I had a conversation with a lonely snowman this week. Visiting the North of England, I met this forlorn figure, a white silhouette marked out alone on the wintry horizon, his frosty cheeks smudged charcoal grey with tears as he bemoaned the loss of this friends and remembered good times past.

Captive in his icy garden on a hill, he turned wistful as he regaled me with stories of the friends he used to make in bygone times, over the fence in the next-door school yard.

“A new snowman would appear every winter day", he told me, "the children's busy hands creating in the snow every break time, and before and after school. We’d chat over the fence, the children running rings around us as they pulled their sledges, played sliding games on the ice and had snow ball fights that lasted until their little fingers turned numb in their wet mittens. We found it impossible not to smile, their excitement was so infectious. The sound of those mischievous little people laughing and playing in the snow brought on a glow warm enough to melt even our icy hearts.”


But the playground is deserted now, not a snowman in sight, despite inches of the white stuff, perfect for building with. Even the children have vanished. So where are they now? I ask. Why are you all alone?


“I blame the elf & safety killjoys!” he rages, his white face momentarily flashing red. Keep calm, I urge him. If you get too hot under the collar you’ll melt!


“The schools have not only banned snowball fights, but they now insist on keeping the children indoors when it’s icy out. Can you believe it?! They are so afraid of being sued for accidents if the children slip or trip.  But what about their childhood? They are missing out on what could be some of the most magical moments and memories of their lives. And what’s to become of me? A sad, lone snowman. The only one for miles around!”


I am so moved by his plight that I resolve to find a way to connect him with other snowmen again.  They are far fewer now, scattered sparsely across the landscape, but there must be some snow-cial media platform that could help put them in touch, surely? Ideas anyone?


And as for keeping our children safe, don't get me started!  What is this ridiculousness about a health & safety risk?  In robbing our children of such a key part of childhood fun, surely the far greater risk is in denying them a very basic human right!

Don't listen to the killjoys.  Let's make the most of the festive fun.  'Tis the season to be jolly after all.  Merry Christmas everyone!  Happy Holidays!

The Conversation is taking a break over the festive season,
returning 12 January 2014