We were all delighted to see the inimitable Charon QC's return to Twitter this week, after a long spell offline due to sickness. He assures us all he is on the way to a full recovery, although not quite there yet.

Of course as you'd expect with any legal sage, his mind has been busy over the last six months or so of his recuperation. I was keen to know if he had any particular observations he'd like to share after this extended period of reflection, on the legal Twitter- and Blogo-sphere in particular, on legal education (given we are at the start of a new academic year) and on the legal profession and its future more generally.

"It's such an interesting time for me to be coming back into the fray. I've been watching from afar how the influence of our favourite legal bloggers has
steadily grown, even in just the last six months.  The legal blogosphere itself has contracted, but the influence of those leading the field has grown.  And it's interesting to see how their interaction with traditional media has increased as this has happened.  For example David Allen Green is now blogging regularly for the FT, as well as his regular spot for The Lawyer. Adam Wagner's Human Rights Blog is just amazing, as is Carl Gardner's HeadofLegal.com. They are both unbelievably prolific, particularly on Twitter. It's impressive to see the lightning speed with which they both continue to push out intelligent blog content in response to breaking news. Superb.

"I'm also a huge fan of John Bolch's Family Lore blog.  I can't imagine anyone practising family law who wouldn't want to be a regular visitor to his blog.  That's the position he has created for himself.  I also like Alex Aldridge's Legal Cheek. He is most definitely irreverant and likes to live close to the wire.  But his posts are very sharply observed and he is a force for good. It's a huge effort to keep creating fresh content to the extent all these guys do, but it has reaped big rewards for all of them because their stature has grown.  It's taken them to another level of influence altogether and they are now part of the media establishment." (See my Conversation with Alex last year on the increased responsibility that comes with this...)

In case any of you are worrying, Charon reassures me his maverick status is not under threat. He has no ambitions to become part of the establishment, emphatically choosing not to.  He likes the freedom to do as he pleases he tells me, (for which read make mischief).  And his association with Legal Business, where he is billed as a "sardonic law blogger", has very much been agreed on this basis.

Being at the start of another academic year, and knowing Charon's background as the founder of BPP Law School, I was also keen to know what he thought of the news this Summer of BPP's "university status".  "It's an interesting development, presumably designed to appeal to the extremely valuable overseas market as much as anything else.  In the UK people have a reasonably astute idea how the different legal educators compare, but less so if you're applying from elsewhere in the world and so the word "university" is very reassuring."  Kysen has had a close relationship with Nottingham Law School over many years and I was bold enough to ask Charon where he thought they stood in the ever-increasingly competitive landscape for legal education - despite his allegiance to BPP as its founder.  "There's no doubt that NLS has set the standard that everyone works to, in terms of quality of scholarship and learning experience. Indeed to hey have bred a generation of legal education innovators who have in time moved on to other challenges elsewhere, taking a little bit of the NLS ethos with them wherever they go. Other talent to have been incubated there includes PeterJones, who has an OBE for his services to legal education; and law management guru Professor Stephen Mayson; and Peter Crisp, whom I remember recruiting the during my time at the helm of BPP. NLS created the original template and they are to be respected for that".

Any other stories that livened up his recuperation? Plenty has happened while he's been laid up, particularly the litigation and Legal Aid reforms. I was interested in his take on all of this. Had anything struck him in particular?

"I enjoyed following the heroic efforts of top QC and Chairman of the Criminal BarAssociation, Michael Turner, in scuppering the Government's plans for competitive tendering for criminal Legal Aid - the ridiculous idea that defence briefs even for the most serious crimes be handed out to the lowest bidder. Lawyers up and down the country cheered as our man Turner challenged Justice Secretary and Lord Chancellor Chris Grayling to a face-to-face showdown, complaining he had failed to engage the politician in proper debate on the matter, despite having invited him numerous times.  Grayling is not a lawyer and at least he had the sense to listen (finally) to someone who is, abandoning this aspect of the Legal Aid reforms.  A good example of what influential committees, and individuals, can achieve."

On the subject of influence Charon, glad you're back to wield some  :)
*** 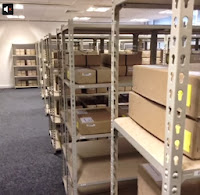 They say a picture paints a thousand words... Interesting to see how Vine is creeping in to our everyday communications. Did you notice this, tweeted by the press office of the Independent Police Complaints Commission?  A six second video to show the volume of evidence amassed for the Hillsborough trial.

Those of you who know me well are familiar with my passion for words. But equally a continuing fascination is the balance of power between visual -v- textual -v- verbal communication. Vine opens up whole tree-lined avenues of new possibilities. Let's get smart with this medium. And do please send me other good examples of Vine being used to add a new branch of understanding to a story.
***

Imagine my delight to learn that the Raindance Film Festival will be taking place just around the corner from our Longacre office, in Leicester Square. This is Europe's largest indie film fest and it starts this week, running till 6 October.

Here's the full line-up of treats in store.

Think I should challenge the Kysen team to tweet Vines of their best celeb spots while the event is on in our neighbourhood. Feel free to join in, (#KysenRainDance)... As long as you promise to swing by for a cup of tea while you're near :)
Posted by Clare Rodway at 15:45