Kysen's Serious Night Out at The Comedy Store set me thinking (between chortles) about the "improv mindset" and what we could learn about workplace team-playing. After a Twitter exchange that evening, I spoke to Comedy Store Players co-founder Neil Mullarkey, (who was once the comedy partner of Mike 'Austin Powers' Myers no less), about the comedic skill of riffing off another person.  There's a reason so many comedy acts come in pairs: if you think Mitchell & Webb, Armstrong & Miller, etc, it's clear that today double acts are less about a stooge and a funny man, and more about two comic heads being better than one. And seeing how much the improvisation skills displayed by the Comedy Store Players in the various skits and games they laid on for our entertainment relied on their ability to read team mates' minds and together act as one single comedic body, the link with team-working in the office is clear. (And yes, we do expect work at Kysen to be this much fun.)

Digging in to the background to the Comedy Store Players' improv routine after the show, I was fascinated to learn that Neil runs improv workshops for businesses specifically to promote better teamworking, in addition to his glittering TV and film career (this former Cambridge Footlights president appears in two of the three Austin Powers films, International Man of Mystery and Goldmember). Makes total sense!  When he told me his philosophy about how much people and teams in business have to gain from embracing the improv mindset, and when I realised that clients of his training business include professional firms such as Deloitte and global corporates such as Google, Microsoft, GlaxoSmithKline, not to mention Walt Disney ... I was all ears.

"Working with others in improv situations is all about collaborating and highly attentive listening", he tells me, "which is why the skills are so relevant to the workplace environment and can be so effective in transforming teams. In creating "Super Teams" in fact. But other key aspects of improv are more alien to business culture, for example concepts of "being in the moment" and "vulnerability". It's an entirely different kind of thinking, as much about instinct and intuition as about cerebral activity. We encourage people and businesses to embrace their creativity and enhance their communication skills in new ways.

"Improv actually started in the Chicago of the 1920's with Viola Spolin who was working to enhance the language skills of deprived children. Only decades later did it evolve into the type of theatre performance we know now. What I and others are trying to do (in the Applied Improv Network) is return to the roots of this ethos to help even the stuffiest and most diffident (and those who don't know they are suffering from over-confidence) to become more creative communicators and leaders."

This showreel will give you a glimpse into the sorts of things Neil covers in his workshops. The sessions are designed to improve participants' skills in listening, influencing, rapport, assertiveness and presenting, so individuals can learn how to tell a story in a far more engaging way. It also teaches them how not to get thrown by the unexpected, but be nimble enough to use it to their advantage.

My favourite of the improv games we saw at The Comedy Store was a storyline created by random suggestions from the audience for setting, plot, theme, characters, etc (Winston Churchill and doilies seemed to be a recurring motif), with the comedians taking turns to improvise a line each to take the story forward, the compere pointing to direct the switch between comics mid-sentence and sometimes mid-word, and doing this faster and faster as the game went on. The best, most hilarious lines came as a single sentence was shared between three or four people, and as the actors had less time to think. Interesting how sometimes the best team-working comes when there's no time for individuals to think independently at all! 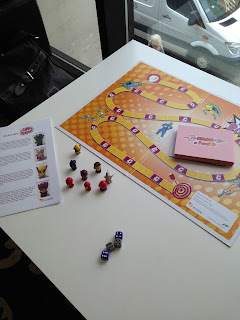 Another fun highlight this week was testing out our PR learning game, SuPR Powers, with good friends Julie Gingell and @VictoriaFay from @SA_Law. The idea is to use the concept of SuPR Heroes to encourage developing PR professionals to see "difficulty" as an opportunity to show off skills, rather than an excuse to give up and think it's Game Over. Super heroes are defined by adversity.  After all, if Clark Kent had never faced Lex Luthor, he would never have leaped in to that phone box to put on his Superman costume.

The learning starts by asking participants to share and discuss classic scenarios that commonly threaten their best ideas for profiling their clients.


They are then asked to turn these into "chance cards" for a board game that will either send players backwards or forwards a number of squares depending on how the challenge is handled.

Did Julie and Victoria enjoy the game? We all did, most definitely.  Helped by The Hospital Club roof terrace and some rare sunshine!  But Julie topped my idea by suggesting a Christmas Special version where players are invited to dress up in SuPR Hero costumes themselves and move round a person-sized board (think Twister) using giant dice. What a great idea! Perhaps I should start making plans for a special December Tonic event. Are you up for this? You need to tell me if you are!
*** 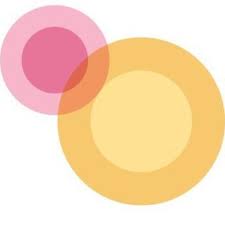 And just in case you're thinking it's all play and no work at Kysen, I should mention our Comedy Night Out came at the end of a review of an outstanding three months since our new team members arrived in the Spring.

Not sure we've ever had such an impressive book of cuttings and video clips at Kysen - and such quality results delivered by so many different members of the team, new and old: regular showings on BBC and Sky News channels, and across all the broadsheets on a regular basis as well as the leading trades. And all tightly focused on where clients' need to be placed to make PR work hard for the needs of their business.

Well done Team Kysen! I'm proud of you all. A great summer finale before starting a new term!