The BBC’s Claudia Hammond wants lawyers to rethink their perception of time. Addressing a room full of professionals used to measuring their working life in six-minute segments, and all looking for a different way to do work and life (we were at one of Lawyer On Demand’s Life With Law events), the Radio 4 All In The Mind presenter, psychologist and author of Time Warped talked to us about how and why we perceive time the way we do and offered some clues as to how we can become the masters of our time, rather than time being our master.


Speaking to me before her presentation, Claudia posed this question: “Have you ever wondered why time flies when you’re having fun? Or slows down when you’re in distress? Survivors of car crashes typically talk about that critical 10 seconds leading up to the moment of impact and just afterwards seeming to last an age. Our perception of time is relative – depending on our level of busy-ness, the level of novelty in our environment or situation (because taking in new information requires more time as we need to create lots of new memories, which is why it can seem to take longer). Emotion slows down time also, as does a high body temperature, which is why time might appear to us to warp when we’re ill. But it is not straightforward either, as there can be a difference between our perception of time as it’s passing, compared to looking back and remembering. Something everyone can relate to is the phenomenon of "Telescoping", where we have trouble remembering precisely when a key event happened.” You can try this now. Which year would you say the following happened? Click on the links to find the answer: the Thailand tsunami, the bombing of the Twin Towers, the Chernobyl Disaster. This one will really shock you: when do you think was JR shot? “We tend to think key events happened more recently than they did – and then we feel old when we realise how long ago they were, blaming the ageing process for our failing memory. In fact it has more to do with the fact that memories of such dramatic moments are particularly vivid, unlike other memories from the same periods of time. They feel more like recent memories because of this.”

She also talked about another familiar phenomenon, “Planning Fallacy” – a posh word for people’s inability to estimate accurately how long it will take them to get a job done or reach a goal and their insistence that somehow in the future they will be less busy, more organised and generally have more time than they do now. Some awkward shuffling was heard in the room as she talked about this.

In a time when solicitors are so challenged to find a better alternative for calculating the cost and value of their work than the billable hour, Claudia has really made me think. Yes, an hour of a City firm partner’s time may cost £400, but now I’m asking: how long is that hour anyway? Perhaps this is the point the in-house legal community has been trying to make all along. Maybe lawyers should be factoring in an element of Claudia's time warp and offering discounts for the hours that fly because they’re having so much fun. Now there's an idea... Could take the whole discussion to another dimension.
*** 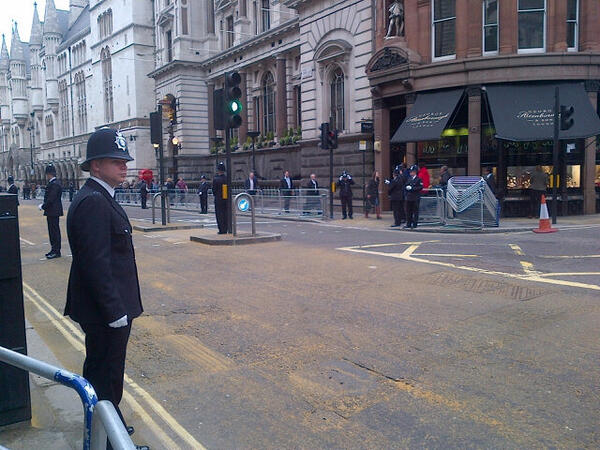 An eerie atmosphere on Fleet Street and Strand early morning this Wednesday as the City prepared for Baroness Thatcher's funeral. Visiting friends on Fleet Street and in the Inns behind, I arrived early to avoid the rush and make sure I could cross the street given the police had closed the roads. It was not just the sight of this normally bustling area suddenly devoid of traffic that was so strange, but the noise as well. You could hear people's footsteps and unfamiliar echoes. Also to see 40 or so policemen, all in their best dress uniforms complete with custodian helmets (the classic Bobby helmets), stretching west to east for as far as I could see from Strand to Ludgate Hill added to the surreal aspect of the scene.

A day of reflection and thankfully no serious disruption from the anti-Thatcher lobby. Unusual to see the City this thoughtful...

Talking of Chernobyl, this weekend I'm looking forward to a charity fundraiser in support of Chernobyl Children's Lifeline, which provides respite breaks in the UK for the children still suffering today from the aftershock of the Chernobyl disaster. Now it's out of the headlines, we barely give these people a thought. But in the 27 years since the nuclear explosion, 300,000 people have been displaced and the social deprivation that has resulted is heartbreaking. Not to mention the heightened rates of cancer in this community.

Chernobyl Children's Lifeline organises recuperative breaks of four weeks at a time in the UK, willing families taking them in to their homes. A cousin of mine took in two young boys last Autumn and is keen to do her bit to fund more trips so is hosting a celebrity jazz night for the purpose. Click here to find out more about this charity, or here to make a donation.