What an encouraging change to see someone winning an award for telling it how it is and earnestly trying to do something about it: Mira Bar-Hillel, the Evening Standard’s long-serving property and planning correspondent, feared campaigner against the property world’s most rogue elements and general "tour de force", was this week honoured with a very well-deserved life-time achievement award at the LSL Property Press Awards.

I caught up with her for lunch just a couple of days later. The date had been in the diary for weeks. I’d read Mira avidly for years and heard reams about her from Standard colleague court reporter Paul Cheston, but I’d never met her. I was very much looking forward to it. And when the day came, of course the icing on the cake was learning about her most recent cause for celebration.

I took the opportunity to ask her about the campaigns she is so famous for – some of which have changed the law. Which were the highlights for her?

“My first major campaign was in the mid 1990s when, horrified that flat owners were getting such a raw deal from a very greedy element in the landlord community.  The game of these so-called "ground rent landlords" was to invent and/or inflate major works on blocks which the leaseholders struggled  - or were unable - to pay, quite happy to turn their back on the catastrophic effects their tenants would suffer. This was serious stuff. Stories of despair and destitution were rife – even suicide. My editor was right behind my campaign to change the law and so the concept of giving proper protection to tenants received the full force of The Standard’s formidable campaigning ability.  In June 1996 we succeeded in changing the law and since then it has been strengthened further, so millions of flat owners can now resist bullying landlords and fight for their rights.

Another highlight is my campaign in 2001 for better protection for flat buyers when a new scandal gripped the London property scene: residents forced by developers to pay up and move into “luxury” flats which in reality were incomplete, not "finalled", by the warranty organisation just to make their half-year figures look better. Within months of The Standard’s revelations, the Council of Mortgage Lenders changed its guidance for solicitors, banning them from completing until buildings have passed final inspection.”

Of course Mira is perhaps best known for her perseverance in working to change the regulation of estate agents to protect the public from the rogue element. Thanks to her tireless campaigning, in fact her downright refusal to give up on the matter even though it took years, selling agents are now compelled by law to belong to an Ombudsman scheme.

“I could never understand why, for decades, governments of all shades refused to protect the public from rogue estate agents; I am totally at a loss to comprehend why, having finally seen the light, they still stubbornly refuse to subject rogue letting agents to any accountability.”

Other highlights for the rest of us include her role saving Paternoster Square and St Paul’s from the worst of modern architecture, with a little help from Prince Charles; and, some 20 years later, do the same for the Chelsea Barracks site in Belgravia; also promoting the idea for a giant Ferris wheel next to County Hall as a millennium project. It was the stunning images of what was in the architects' minds' eye, published first in the Standard, that sparked the public’s imagination and support for what is now one of our most-loved London landmarks.

So what does she think of her lifetime achievement award?

Glad to hear it Mira! Looking forward to your next campaign :) 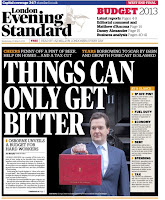 We felt for our chums at the Standard this week as they apologised profusely about the Budget leak. Indeed my lunch with Mira was interrupted by several calls from her colleagues as the whole editorial team was clearly concerned about the slip. Editor Sarah Sands said she was "devastated", clearly worried that the special arrangement the paper has enjoyed with successive Governments will now be reviewed.  (They receive Budget detail in advance so stories can be prepared ahead for publication after the Chancellor's speech.)

But imagine the poor tweeter! Apparently a very young and inexperienced journalist, in a first job of their career.  Few would blame such a novice for the error. If ever there were a lesson in why it's a mistake to delegate tweeting to the most junior person in the office by default, just because the assumption is that this generation "gets" social media better than the rest of us, this is it.  You wouldn't ask the most junior person in the office to stand up in front of an audience of thousands and  present important information on the company/firm, would you?  So why does anyone think it might be appropriate on social media platforms?
***

As Twitter celebrated its 7th birthday this week, complete with a patent application as if to prove its coming of age, we had fun at Kysen looking back down the years and contemplating how astonishingly fast this innocent-looking little bluebird has managed to chirrup its way into our lives and make its nest in the mainstream of modern day communication.

We love how Twitter has changed our lives for the better, bringing us breaking news far quicker, almost as it happens.  We also like the new proximity with clients, journalists, and professional contacts throughout the working day, this new medium enabling us to chat as if we were just talking to them over the tops of our PCs, as we do each other in the office.

We've also had fun making new, and reconnecting with old, clients and friends. For me, the highlights have been getting back in touch with old colleagues from legacy firm Brecher & Co, who have since become much-loved clients.  And on a personal note being "found" on Twitter by a childhood best friend from the Brownies (don't attempt to visualise this, please!) who I hadn't seen since I was 14! We are now back in regular touch. If you think Twitter is only about the superficial and the inane, I'd strongly urge you to think again.  This medium most definitely can make valuable, meaningful new connections IRL*.

But what will the next seven years bring? We couldn't have imagined Twitter before it arrived. I wonder what the future has in store...