Neil Kinsella has often wondered if he made the right career choice. For the rest of us watching him over the last 10 years transform Russell Jones & Walker into a multi-award winning firm in his role as Chief Executive, there is absolutely no doubt that he did. And this week never more so, as he announced plans to merge with the world's first listed law firm Slater & Gordon. But Neil's alternative choice was to be legal adviser to the iconic Factory Records founder, the late Tony Wilson. Ever since he turned down Tony's personal invitation to take on the role, he has always wondered what could have been....

I dropped by to see Neil on Tuesday evening. The man was exhausted after two days of solid press interviews. Everyone wants to know more about the merger. I asked him to talk to me about something we wouldn't read from the press. A more personal take on the story...

"I tell you what I feel really passionate about: why is it that personal injury lawyers have lost so much respect? There's something really wrong here. I remember the days working with Rodger Pannone on the Manchester air disaster and we were seen as heroes, campaigning for justice for the little men and women being fobbed off and sidelined by big suits in a corporate monolith that didn't want to accept any responsibility for what they'd done wrong and how many lives they'd ruined. And we weren't the only heroes around. Where are the Michael Napier's of today?"  [He is referring to Michael Napier CBE QC, founder of the Association of Personal Injury Lawyers and famous for his legal campaigns to help the victims of the Zeebrugge disaster, also victims of the Thalidomide tragedy, widely recognised as one of the worst medical disasters of modern times.

"Today, personal injury lawyers are seen as not much better than robbers," he continues. A fantastic spin job by the insurance industry. Of course there have been some dreadful cases of fraud and exploitation, but we don't celebrate the heroes in this field anymore - and that's wrong.  I honestly believe there's space to promote a firm of campaigning lawyers to the market and re-ignite the faith of consumers.

I also feel very strongly that when it comes to legal services reform and ABSs that the legal profession should be bold, and grasp the opportunity.  Why are we standing aside and letting the retail brands swoop in to take the space? Consumers want something different, that's clear. But it's really important for the profession that there is a proper, independent law firm brand to provide this, not just the retail brands. The legal profession should be standing up and saying "We can do this." Hopefully RJW now is.

Well, Neil may continue to dream wistfuly about the dazzling, exotic career he could have had as a music lawyer. But to me, he's always been super cool. 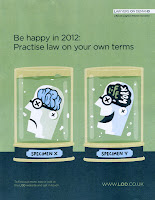 We love Lawyers On Demand's ad campaign in Legal Week  - "Be free: to practise law on your own terms." Billed as "a Berwin Leighton Paisner innovation", (they have won numerous awards for the concept including a prestigious FT Innovative Lawyers Award), LOD offers an alternative way for top lawyers to work freelance without having to dumb down the level at which they operate - in turn, offering clients a more flexible legal resource with lower overheads.

The "Practise law on your own terms" ads dominate the pages of the magazine with their stand-out colours and strong imagery.  They leap off the page enticing lawyers to re-think the way they work, with arresting open-ended phrases and questions such as  "I wish I was free to

How would you fill in the blanks?﻿

Had to keep schtum about a fantastic stunt at Netlaw Media's new Partners Club this week, a networking event for senior lawyers and law firm managers. 7 Bedford Row Chief Exec Fay Gillott gave the opening speech and she told me mid-week there surprise in store for guests, but I was sworn to secrecy until after the event.

Champagne was handed out on arrival, with a pouch attached to each glass containing a fake diamond and details of a prize draw.  And the prize? A real diamond! Well that set everyone in the room a-quiver.


The only catch was that you had to be in the room when the winner was drawn at 8.30pm or you wouldn't qualify for the prize and the draw would be done again.  Bet that made sure no-one left early! Smart marketing - if a little extravagant!
Posted by Clare Rodway at 16:13